This article, by Piano SVP Strategy Michael Silberman, was originally published on August 14, 2019 as part of Digital Content Next’s InContext blog, under the title “Predicting conversion: Mastering the complex variables of user behavior.”

When a visitor comes to your site, who’s most likely to take the action you want and who’s not? And what would you do differently if you knew the answer to that question?

In my former role at New York magazine, where I spent a decade building the digital media business, I found myself facing this set of questions often. While we weren’t selling digital subscriptions yet, we knew the value of loyal users — that is, the five to ten percent of users who came back four or five times a month and consumed 40 to 50 percent of total pageviews. We wanted to entice more people to come back more often.

I knew there were users who converted from new to returning to loyal along a fairly straightforward path, and others who took longer, or a more convoluted journey, to reach that point. And I also knew there were quite often those that didn’t get to that point at all. If only we could understand those paths and predict audience behavior, I figured, maybe we could do a better job of nurturing users towards loyalty.

Unfortunately, we didn’t have the tools back then to make those predictions — which meant we had to try to urge everyone down the same path. And since each of those users had different needs and affinities towards the brand, that inevitably meant we lost users along the way that we might have been able to entice if we’d had a better idea of what personalized path was most likely to lead them to come back again and again.

Back then, like media executives everywhere, I wished for something that would help my team better understand our audience and their future actions. Was there a magic formula we could apply?

Flash forward to today and my current role as SVP Strategy at Piano. Piano has spent years trying to find answers to the same questions I had when I was at NYMag. And what we came up with turned out to be much more complex than anything I ever could have envisioned then.

In fact, it’s not a straightforward formula at all — and it’s not one set of behaviors but dozens. Not only that, but the exact combination of behaviors that matters is different on every website.

When Piano launched LT[x] — a machine learning framework that predicts likelihood to act — it opened up a window into the behaviors that matter for conversion, beginning with subscribing. Rather than the simple formula I might have envisioned back at NYMag, though, the subscription propensity model that emerged from LT[x] (called LTs) tracks 76 different metrics, using machine learning to pull them together and predict conversion actions.

Before launching, we beta-tested LTs with two customers, and saw exactly the types of results it could achieve. One customer experienced a 20 percent increase in its paid conversion rate, while the second saw an increase in conversion rate of over 40 percent. The metrics that mattered — those that predicted who was most likely to subscribe — included the share of visits on desktop, pageviews per visit and the days of the week a user visited. Equally interesting were the metrics that predicted low likelihood to subscribe — if visitors arrived from social media even 20 percent of the time it drove low subscription likelihood, and if 95 percent of pageviews were on articles, with little homepage traffic, that also indicated low likelihood. For both of those initial sites, though, the actual weight of each metric varied.

It’s only been since we rolled the model out further, though — across five customers, and eight sites and counting — that we saw just how much difference exists from site to site. The way each metric contributes to likelihood to subscribe is unique to every site we’ve worked on. In some cases, in fact, the same metric can have the opposite effect from one site to the next. 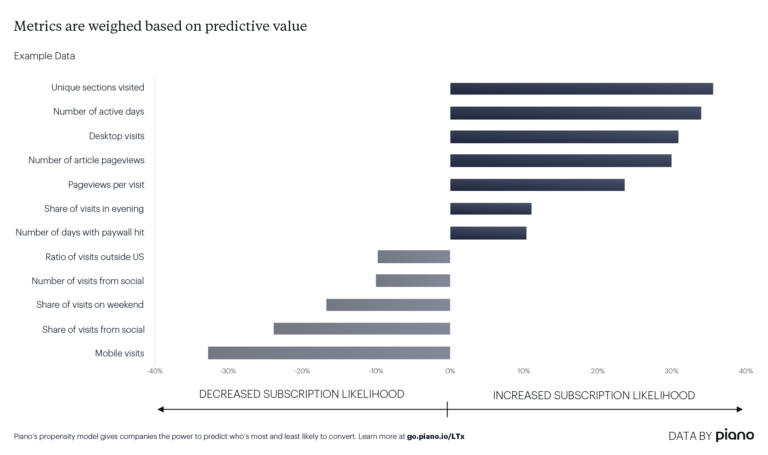 Take one site we’re working with, as an example. There, where visitors are looking at the site plays a central role in their likelihood to subscribe. Since it’s a regional newspaper, that’s not surprising — the most active users are local. For other sites, a particular metro area may have little significance, but national boundaries still tend to matter — with users in a site’s home country generally having higher subscription likelihood.

There are some behaviors that pop up again and again. For the same newspaper client, the more unique sections and authors users read also contribute to that same site’s high likelihood to subscribe rates — also easy to understand for a newspaper with a diverse range of writers and content types. The more a user is engaged across the board, the more likely they are to become loyal and subscribe. This breadth of engagement is almost always a strong positive signal.

Meanwhile, for other customers, it’s engagement metrics like number of active days or number of paid offers viewed or the share of pageviews from recirculation that are top predictors. For clients with very high value content where visitors are quick to convert, it may be whether a visitor is coming from desktop or mobile that has the biggest impact, with the typical high engagement metrics having a smaller impact.

All of that means there is no one magic metric for the industry to focus on across the board. The good news is that, with the spread of AI-enabled technologies, understanding and harnessing this information is becoming possible for the first time.

So what does this mean for the media providers trying to use those predictions to customize their user experiences?

Once the metrics that matter are determined for each site, companies can start to use the predictive powers of the algorithm to personalize the cues they put in front of a particular user and the path they take to lead them to convert. That could mean putting a subscription offer in front of those most likely to subscribe, for instance, but a registration offer in front of those less likely to. Or it might mean changing the meter height based on whether a user is more or less likely to subscribe.

And for users, that personalization matters just as much as it does for the companies that provide it. Customers expect one-to-one personal experiences. It’s what they wanted when I was still in media, and even more so it’s what they’re looking for today.

Michael Silberman, SVP Strategy, leads Piano’s Strategic Services team, helping clients develop reader revenue strategies and drive success and revenue on the Piano platform. He joined Piano in 2018 after 10 years building the digital media business at New York magazine, and earlier, as one of the top editors launching and growing MSNBC.com in the early days of the consumer Internet.

Your email is now subscribed to our newsletter. Stay tuned for updates, release notes, insights, and trends from Piano.